The overall goals of this project are to:

Understanding the evolution of fractures in the Colville basin hydrocarbon system is critical to developing a better working model of the hydrocarbon potential of the region. Naturally occurring fractures can play a key role in the evolution and producibility of a hydrocarbon accumulation. Fractures can both provide pathways for hydrocarbon migration into a reservoir and enhance permeability within a reservoir. Fractures are dynamic and sensitive to in situ pressure and can be damaged or destroyed during drilling and production.

Benefits
The goal of this project is to develop a new and clearer picture of when and where fractures developed during the evolution of the Colville basin and adjacent Brooks Range foothills in order to better predict the timing and location of fracture-enhanced reservoirs, and the timing, orientation, and depth of oil and gas migration pathways. This in turn will improve understanding of the North Slope petroleum systems.

Much of Alaska’s governmental and private economies revolve around the petroleum industry. However, recent years have seen production declines from Prudhoe Bay and adjacent oilfields and a decrease in exploration by major oil companies. This project will provide information that will encourage exploration in an underexplored part of northern Alaska that includes the National Petroleum Reserve-Alaska, State lands, and Native Corporation lands. The project will also help encourage exploration in northern Alaska by smaller independent oil companies by providing public access to much-needed data and exploration concepts in this geologically complex region.

Summary
The project consists of three major tasks. Two regional transects across the eastern and central Brooks Range foothills and adjacent Colville basin will be constructed using new and available detailed geologic surface and subsurface mapping, new geochronologic and thermal data, and existing regional structural, thermal, and geochronologic information. These data will be used to develop retrodeformable balanced cross sections that will provide a model of when, where, and at what depth critical fractures formed.

Concurrently with the detailed field studies, subsurface well data from the Colville basin will be used to develop a regional model of the present day in-situ stress distribution within the basin. In-situ stresses control the type and orientation of fractures and the depth at which they occur. Integrating the current day in-situ stress distribution with the known fracture patterns should provide a regional picture of the depth and orientation of the open fracture networks and thus the orientation of basin-scale fluid flow at any one time within the basin.

(March 2007)
The project is in the beginning of its fourth year. All three phases of the project are nearing completion. The project was scheduled to be completed by September 1, 2006, but the completion date has been extended for 12 months to August 31, 2007.

Funding
This project was selected in response to NETL Anchorage office solicitation DE-FC26-01NT41248.

Publications
Results of this project have been presented as papers at national meetings, including those of the American Association of Petroleum Geologists and the Geological Society of America. 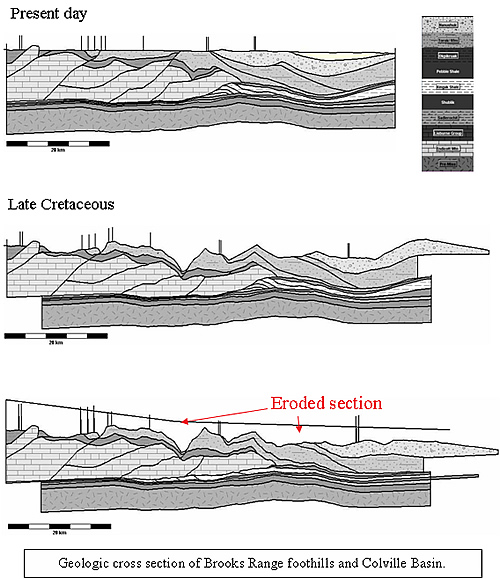