The goal is to develop a catalyst for methane (CH4) decomposition for the high-yield production of hydrogen (H2) and solid carbon without the production of the greenhouse gas carbon dioxide (CO2).

Through DOE's Downstream Environmental program funding of the project Proton Exchange Reactive Membranes for Conversion of Light Alkanes to Clean Liquid Fuels, INL developed a stable and efficient catalyst for converting CH4 to H2 without the generation of CO2. This catalytic process could provide a significant advance in the development of the hydrogen economy utilizing natural gas CH4 without the production of greenhouse gases.

This research explores direct catalytic decomposition of CH4 to make H2 and solid carbon. Solid carbon particles that are produced flow out of the catalyst bed and are collected in downstream filter equipment. The catalyst was produced using a mix of proprietary metal salts that were deposited within a common high-surface area with microporous support.

Without optimization of the catalyst, reactor, or process conditions, CH4 conversions over 50% were obtained with a corresponding high H2 yield. Higher conversions are expected with system optimization. The catalyst was found to have stable activity in tests as long as 30 hours in a continuous-flow, packed-bed experimental test stand. Tests were performed at atmospheric pressure, at temperatures of 500-700 C., and at industrially relevant space velocities of up to 2.5 grams (g) of CH4 per g of catalyst per hour. Catalysts for this process are comparable to standard industrial catalyst costs. In the absence of the catalyst, the reaction does not take place. Reactor and associated unit operation capital costs are expected to be low, since the reactor and separations are simple and do not require development of new technologies.

The project tasks are planned to accomplish the following:

An initial ASPEN numerical model of the reaction process has been set up. Thermodynamic analysis shows that this reaction requires less energy per mole of H2 than traditional steam methane reforming commonly used to make H2. The reaction is equilibrium-limited, with maximum H2 concentrations constrained to 75 mol % at 600° C., increasing to 96 mol % at 800° C. Experimental work has focused on a metal modified zeolite catalyst. To date, the catalyst has demonstrated 70 mol % hydrogen in the reactor effluent at 700° C. and stable catalyst activity for 30 hours-the entire test duration.

Hydrogen yield as a function of time on stream (TOS) was explored at different reaction temperatures. At 600-700° C. the production of H2 was relatively stable, but at 800° C., a marked decrease was apparent. In addition to H2, other reaction products included benzene and higher aromatics. For the TOS utilized, the catalyst retained a high portion of its initial surface area and micropore volume. Transmission electron microscopy analyses showed a homogenous covering of the zeolite surface with carbonaceous deposits.

As part of the project, additional research is needed in catalyst optimization, process optimization, reactor development, and carbon analysis. In addition, market analysis for the high-quality carbon product and economic analysis of the processes must be performed.

To realize a greenhouse gas-free hydrogen economy, CO2 must be sequestered or not produced. This catalytic route offers a promising path for economical, environmentally sound production of hydrogen without production of CO2.

Methane decomposition for the production of H2 and solid carbon is being accomplished by experimental system modifications and approvals to allow for overnight catalyst testing, catalyst optimization for the purpose of increasing hydrogen yields, extended catalyst testing for up to one full week of continuous hydrogen production using promising catalysts developed in this study, energy and mass balance calculations using a process simulation code such as ASPEN Plus to estimate energy conversion efficiencies and compare those with steam reforming, and technology transfer to industry.

Additional funding for this project was received in August 2004. This project will explore the catalyst discovered in the Proton Exchange Reactive Membranes project for the production of hydrogen and solid carbon by the decomposition of methane. The Cooperative Research and Development Agreement with Ceramatec Inc. is being modified to cover this new scope of work under this project.

Publications
Publications are being prepared and will be submitted for peer review after protection of the technology is assured by patent coverage. 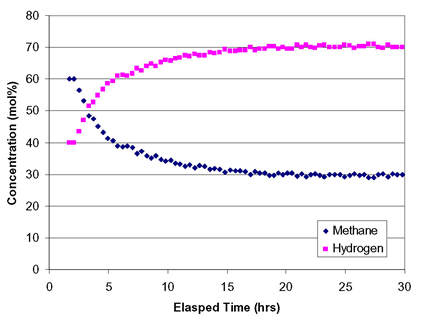