GASNET™ is a wireless, self-powered network of keyhole-installed and keyhole-replaceable sensors capable of measuring and communicating key process variables such as pressure, flow, and vibration.

Motivation for this effort includes:

A system such as GASNET™ will enable real-time monitoring of local distribution company networks with a wide sensor-suite and the potential for relatively low-cost network expansion. The data developed from such a system will be useful for improved Stoner modeling and data-logging for capital-project planning. The monitoring will help to alert system operators to safety problems and trouble spots, providing for improved operating safety and performance.

The GASNET™ system could provide increased understanding of distribution network in situ conditions, leading to cost benefits estimated to be over $10 million annually, nationwide.

The entire three-phase project effort for the development and field-deployment of a prototype GASNET™ system has been very successful overall. The main technologies, ranging from sensing, communications, software and display to in-field installation, safety design, real-time and off-line data logging were shown to be feasible in both cast-iron and steel mains. The project resulted in the development of three key technical subsystems (sensor-wand, electronics and power system) as well as the embedded software and graphical user interface (GUI) to collect, display and store all the measured data.

Based on these results, one can conclude that a GASNET™ system has valid applications in more than one form within the gas main distribution and transmission markets. Sensing and communications options are vast enough to cover any existing utility preference and are upgreadable as technology evolves. The use of the collectable data by the utilities has yet to be explored in depth in terms of its use as a monitoring, emergency, or even a capital-expenditure planning tool, but we believe this to be only a matter of time before utilities come up with more ways to integrate this data into their operations.

When a utility lays out a distribution system, a computer model is utilized to predict pressures and flows in the system, allowing the utility to size compressors and storage facilities. Once the pipelines are installed however, real-time monitoring of operating parameters is only done at the pumping/storage/regulating facilities. Additionally, data from individual gas meters collected over time and compared with volumes measured at the supply centers, can give some indication of the state of the network. This method of operating does not provide the level of detail and opportunity for system optimization that would be possible if a distributed network of real-time monitoring sensors were to be employed.

The pre-prototype sensor system developed for the network consists of a pipe-internal sensor wand and an external safety housing and power supply that communicates is linked to a remote graphical user interface subsystem. The sensor wand itself consists of a single printed circuit board (PCB) potted in a machined national pipe thread (NPT) fitting. The electronics are based on a simple architecture, relying on a dedicated microprocessor to poll all the sensors on the wand, while interfacing to the wireless radio frequency (RF) electronics over a simple serial cable with a pre-established protocol.

The safety enclosure that was developed to connect to the NPT-plug is not only to protect the PCB, but also for operational safety. Utilities require that all non-certified electronics be purged and pressurized with an inert gas. The pre-prototype uses a vacuum pump to evacuate the sealed electronics enclosure and a pressurized cartridge to deliver CO2 gas through a regulator set to several psig above pipe-internal pressure.

The power subsystem consists of an enclosure with original equipment manufacturer (OEM) NiCad battery cells wired in parallel to allow for week-long field trials. The graphical user interface (GUI) was developed based on the idea of displaying a single unit’s data, while having the data for other units readily available and being able to easily switch which sensor’s wand’s data was being displayed. The software resides on an H8 micro-controller that runs custom firmware to interface to pressure, velocity, relative humidity, temperature, 2-D accelerometer, two serial communication devices and digital potentiometers. The individual units are designed to be deployed in a network mode, where each unit is a sensor-gathering node capable of transmitting its data through the pipe cavity in wireless format to another node acting as the central data-collector. Different work modes are defined to allow different levels of power conservation and interactivity of the system.

A functional demonstration of the system involved the installation of multiple units in live cast iron mains, with collection and communication of data through the pipe wirelessly to a single node used to extract and log the data. The test revealed that gas flow rates exhibit highly dynamic and oscillatory behavior across a half-mile stretch, in terms of both amplitude and direction, as a function of time-of-day. Limited pressure measurements showed pressures to be within the predicted range; however, dynamic behavior was not measurable due to premature sensor-failure. Gas temperature and water content were found to be extremely steady, with water content measured at less than one percent by volume. Mechanical pipe-wall vibration measurements proved to only be possible within the vicinity of an instrumented pipe section due to the segmented and isolating nature of the cast iron main’s bell-and-spigot design. However, measurements did show that road-traffic could be ignored, while road-surface jack hammering was readily detected, as were impact-loads as small as a pipe-wall hammer strike.

The GASNET™ system was shown to be a feasible concept in terms of its technology and its capability to collect, transmit, and log data over a distributed network of sensors.

This project has been completed and a Final Report is available. 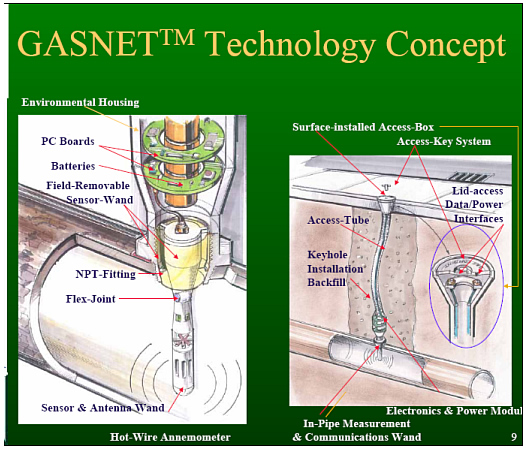