The goal of this project is to provide the integrated approach necessary to address the increasing water resource conflict between natural gas production and the interests of water stakeholders located within shale gas basins. The objectives are to demonstrate that the novel, recently-patented AltelaRain® technology can be successfully deployed in the Marcellus Shale Basin to treat frac flow-back water, and that this technology can be operated within state and federal regulatory requirements in a cost-effective manner.

U.S. shale gas production has increased 14-fold over the past decade and reserves have tripled. Tapping this resource with hydraulic fracturing (using pressurized liquids to fracture subsurface rock) and other techniques pioneered by NETL and its research partners has played an increasingly important role in greater U.S. domestic oil and natural gas production over the past decade.

The water resources needed to hydraulically fracture the Marcellus Shale and the potential effects of hydraulic fracturing on surface and subsurface water sources have become key concerns for state legislatures, land owners, and the public. This is especially true as the number of issued permits continues to increase and drilling expands to new areas of the Appalachian Basin.

Frac water contains significant amounts of constituents such as salt, metals, sulfates, and chlorides. Additionally, this water contains certain ingredients that are ‘proprietary’ in nature and not disclosed on manufacturers’ safety data sheets (MSDS). The U.S. Environmental Protection Agency (EPA) has recommended that publically owned treatment works (POTWs) no longer accept natural gas frac water. New regulations specifying frac water treatment guidelines are creating distinct challenges for the shale-gas industry. These challenges exist because no single-stage treatment technology capable of economically treating frac water to discharge water quality standards has been fielded. Without such a technological solution, industry’s ability to meet these new regulatory requirements will be severely tested. If industry cannot identify a solution, these new regulations may have the unintended consequence of curtailing the nation’s natural gas development because of related increased exploration and production costs. This would have a direct effect on the national security of the United States. A multi-disciplinary approach is needed that integrates proven water treatment technology with sustainable water resource management.

The AltelaRain® system cleans flow-back and produced water using a unique non-pressurized, inexpensive plastics-based distillation process that can reduce the water volume that needs to be treated as a waste product by up to 90 percent. The impurities concentrated in the remaining 10 to 25 percent fluid volume are disposed of by conventional methods, such as deep well injection. The technology substantially reduces the volume of hauled fluid, the number of waste-fluid hauling trucks miles (and related wear and tear on roads), and hauling and wastewater disposal costs. Unlike other distillation technologies, the Altela process is not driven by electricity—only 2 percent of its energy is electricity—making it ideal for rural onsite well water treatment.

A successful project will highlight the benefits associated with employing best water resource management practices for the reclamation and re-use of this wastewater. By demonstrating the availability of such an industrial ‘best-practices’ approach, a transformational solution can be created. This remedy would not merely minimize potential impacts of natural gas development to the water supply but rather expand and create opportunities for water re-use/conservation.

The expected impacts and benefits of a successful project include the following:

As of March 1, 2011, over 275,360 gallons of Marcellus Shale frac flow-back water have been treated and purified at the well-site, resulting in the production of 182,380 gallons of clean distilled water. The concentrated water generated during this time period equals 69,150 (1,646 barrels), representing an approximately 75% volume reduction in the original amount of brackish water. According to recent water analyses performed by a certified water quality lab, the specific conductance of the untreated dirty water (PW) was 42,400 µmhos/cm; the specific conductance of the clean water (DW) was 30 µmhos/cm – a 99.93% reduction in the dissolved solids (TDS; salts). All of the clean water produced at the demonstration site was able to be beneficially re-used by well operators for additional stimulations and can be discharged to surface waterways, thus reducing the economic and environmental impacts of clean water usage.

The average treated water cost per barrel over the demonstration period was approximately 20 percent lower compared to the previous total conventional disposal costs at the site. As a result of the demonstration project, larger towers were designed for the system and four AltelaRain® 600 modules were sold and installed in Williamsport, Pa. to treat approximately 100,000 gallons of produced and flow-back water per day. This commercial installation is a 50 fold increase in capacity over the demonstration unit and represents the first of many planned facilities to be developed in the Marcellus Shale Basin and similar shale gas basins throughout the United States.

Regulatory environment approvals for implementation of the AltelaRain® water treatment technology solution in Pennsylvania’s Marcellus Shale Basin were obtained. Numerous Pennsylvania Commonwealth agencies responsible for both federal and state regulatory requirements have jurisdiction over the deployment and operation of this system demonstration. In each case, where applicable, Altela has received approval or satisfied related permit/regulatory exemptions with respect to deploying and operating the system.

In summary, the demonstration system successfully met all of the goals outlined for the project: 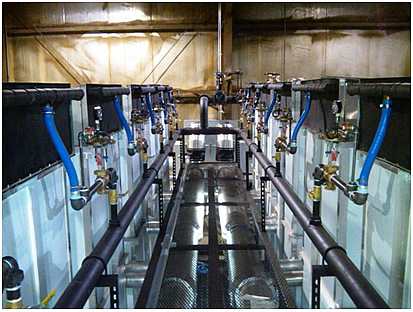 Field demonstration concluded on schedule on April 10, 2011. The final project report is available below under "Additional Information".