The goal of this project is to demonstrate the potential of using Silica Polymer Initiator-Carbon dioxide (SPI-CO2) gel systems for profile modifications in CO2 injection/ production wells. The objective is to advance SPI-CO2Enhanced Oil Recovery (EOR) gel technology by performing multiple small-scale field injectivity tests using both ‘Huff & Puff’ and conventional pattern flood applications. A sub-objective of the project is to improve the SPI-CO2gel integrity by testing different additives as potential substitutes for the polyacrylamide currently being used.

Extensive research to develop foams and gels for the primary CO2 phase has yet to produce foams that are low cost and commercial. A unique, state-of-the-art SPI gel system offers a promising solution to the conformance problem in CO2 floods. Of particular importance to this and other CO2 injection projects is the use of a low-cost external initiator such as CO2. In SPI-CO2 gels, the CO2 becomes the external initiator of the SPI fluid following its placement in the reservoir. An SPI mix slug will be incorporated into the water portion of a water-alternating-gas (WAG) cycle and the CO2 slug that follows will ‘finger’ through and permeate the more viscous aqueous SPI mixture in the flow path, generating carbonic acid, which will immediately initiate the gelation process. This newly set SPI gel will divert the CO2 that follows and cause it to finger and dissolve into a fresh SPI mix, causing more SPI gel to form at another locale. This process will continue until the CO2 is fully blocked in that channel or all the SPI mix is consumed. 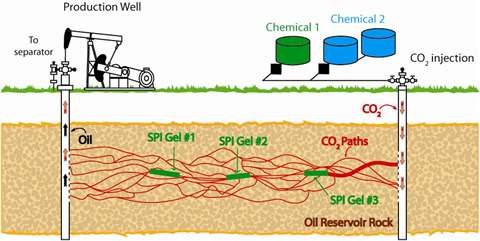 The SPI gel will improve sweep efficiency to a greater degree than conventional systems because it sets up in the high permeability paths that were taken by previously injected CO2. It is unique in that it is silicate based, will remain as a low viscosity fluid until gel initiation, can be deeply positioned, and is triggered by the injected CO2. This is a clear improvement over current technology where the gel gradually sets up as a function of time, regardless of location. In addition, the final product is expected to be less expensive in commercial quantities than competing polymer gels or other systems.

U.S. CO2-EOR production has grown by 4 percent/year over the last 20 years to today’s level of 280,000 barrels of oil per day. The use of SPI gels is anticipated to further improve those levels by 1 percent/year within a few years of a successful demonstration and up to 3 percent/year in future years. SPI could add over 300 million barrels of otherwise bypassed reserves over ten years.

Impact successfully completed the data collection task.  Data from the multiple SPI injection studies with Opertator A and Operator B was collected for processing.  Both Operators worked with Impact to provide data to be included as part of the final technical report.

Two well sites have been selected and approved by both Field Operator B and NETL.

Impact completed their field injectivity study plan and submitted it to NETL.

Impact successfully re-treated well A with SPI gel. Impact injected 3842 bbl. of SPI mixture during this treatment bringing the total amount injected to 4792 bbl. (prior SPI#1 treatment was 950 bbl. of SPI). The operator will continue to monitor the well for a minimum of six months, after which the results will be compiled and a summary included in the final technical report for this award.

Impact has completed treatment of two wells under the first of three SPI GEL field studies (wells A and B). Impact successfully injected approximately 1000 bbl. into injection well A. Initial results show that the injectivity was reduced by 86 percent. Impact moved their field equipment to a producing well (well B) within the same field and completed a second injection of 5000 bbl. Initial results show successful injection of the SPI gel into the producing well. Impact and the field operator will monitor the field over the coming months to determine the success of the two SPI Gel treatments.

The CTI lab performed over 1000 gel-forming bench tests, half at room temperature (74°F) and half at 140°F. Approximately 40 additives have been evaluated to date at various concentrations and in combination with additional additives.

The base SPI polyacrylamide polymer was changed to a more easily hydrolyzed ultra-high molecular weight polymer. Benefits are easier mixing in the field and better isolation of the SPI mix within high permeability zones, a key focus of the industry. One mixture was finalized for use in the first operator’s field tests.

The project has been completed and the final report is available below under "Additional Information".