The goal of the project is to assist in optimizing the technical and economic performance of a residual oil zone (ROZ) carbon dioxide (CO2) flood and transfer the knowledge to other operators. The objectives are to (1) characterize the main pay zone (MPZ) and ROZ within the ROZ pilot area, (2) conduct laboratory analyses and reservoir simulations to evaluate the performance of the ROZ pilot flood, (3) identify and test next generation technologies for ROZ applications, and (4) provide recommendations for an optimum field-wide expansion of the CO2 flood in the ROZ and MPZ at the Goldsmith Field.

Although much of the field characteristics and oil recovery data accumulated over the 40-year history of carbon dioxide enhanced oil recovery (CO2-EOR) research and practice are available, the work exclusively represents studies of the  MPZs where mobile oil resides, the flooding of ROZs is too new and there are no publicly available geologic and reservoir characterization data on ROZs nor any comprehensive field studies of CO2-EOR projects in ROZs. This study will document the application of state-of-the-art geologic and reservoir characterization, laboratory work, and field testing to the ROZ in the Goldsmith Field, Ector County, Texas where Legado Resources initiated a ROZ CO2-EOR pilot project as well as an MPZ CO2 flood in parts of the ROZ pilot area.

Past research has identified the potential for major ROZ resources in intervals below existing fields that are productive of only water, but have significant immobile oil saturation. In addition, there are vast areas of ROZs where no major fields are present. A few new ongoing industry pilot and demonstration projects are beginning to provide data on the feasibility of recovering as much as 30 percent of these resources. In the Permian Basin, CO2 flooding of ROZs has been in the demonstration phase for several years; however, there are no published reports on the performance of these CO2 floods. Recent work by Advanced Resources International (ARI) has estimated that 135 billion barrels of higher quality oil are situated in the ROZs in 12 counties of west Texas.  If 30% of that resource was technically recoverable, it would exceed the total production to date (31 billion barrels) from the Permian Basin oilfields.

This project involves the application and testing of a variety of advanced methods for increasing the recovery of oil from the ROZ of the San Andres Formation (SADR), Goldsmith Oil Field in the Permian Basin. Specifically, the impacts and benefits include:

The larger benefits of this project are that it will help build a dialogue about the resource in the ROZs, their potential value, and, more importantly, a publicly available scientific base of information on the nature of ROZs and provide optimized CO2 flooding designs for this highly promising oil resource. This information is not currently available, and access to the information will greatly accelerate the timely and efficient recovery of oil from the residual oil zones of the Permian Basin and other ROZ-rich basins in the U.S. 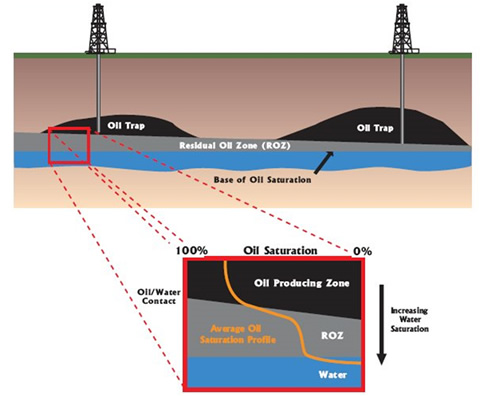 From the water samples acquired, researchers quickly noted the differing water compositions in the MPZ (chlorides rich) and ROZ (more sulfate rich). Field observations confirmed the importance of this as scaling tendencies in the ROZ have been higher than industry’s experience in the MPZs and continue to create issues downhole. The deployment of the CO2 gas lift system was able to address the enhanced scaling tendencies.

The Goldsmith ROZ field area characterization and geologic modeling are complete. Although the six cores originally identified as available for study have been characterized, three additional wells have been cored by Legado.  Four cores originally taken by Amoco in the MPZ during the waterflood development in the 1960s were located, but not included in this study. Core from nine of the new wells have now been described. These are considered to be important to the study and were characterized during the second year of the project. Oil recovered from core will be tested to provide additional data on the composition of oil in the ROZ. Legado Resources has made two separate wells perforated in only the ROZ interval available to the project. They recently put both wells on production test. Samples gathered from the ROZ wells isolated from the MPZ are available and awaiting specialized laboratory testing and analysis. Of particular interest is a cored well that was a nearby offset (125’) to one of the original ROZ pilot injection wells.  The core analysis has shown that the ROZ interval is taking CO2 and has illustrated the reactivity/activation of the immobile and previously unrecoverable oil.

The research team secured injection well profile data from the field and the analysis of vertical conformance of the flood injection is complete. After proving the producibility of the ROZ in the pilot, the strategy of the operator moved to commingle injection of the entire main pay and ROZ intervals. Of specific interest to the profile data analysis is establishing the partitioning of injection through the entire flooded interval including the MPZ and ROZ intervals.

During the course of the project, the field was sold by Legado to Kinder Morgan Production Company.  Meetings with project team members, Legado Resources and Kinder Morgan were held through the course of the project.  An early meeting was held in Houston, TX in August 2012 to review progress and further plan the reservoir characterization, reservoir simulation, and production analysis activities. In addition to thoroughly reviewing the core descriptions, the team brainstormed the development of an oil/gas sampling procedure for obtaining ROZ information, which had never been collected before now. The team decided during the meeting to change the way the initial saturation conditions in the model were set up as the different options available for initialization in the reservoir simulator, GEM, were not adequately representing the true conditions. In order to replicate lower initial oil saturation (40 percent) in the ROZ as compared to the initial oil saturation in the MPZ, water was assumed to be injected into the ROZ to simulate the natural waterflood (Mother Nature’s Waterflood), which has been modeled to have occurred over a span of 15 million years.

The reservoir core description work led to the identification and documentation of differences between the depositional facies and diagenetic overprint in the MPZ, the ROZ, and the interval below the ROZ, suggesting that the ROZ has undergone a different diagenetic (mineralogy alteration) history than the MPZ. Additionally, diagenetic “markers” were seen in core from ROZs in other fields that indicated the presence of native sulfur in voids near the base of the ROZ, a transition from partially dolomitized limestone below the base of the ROZ to partial to pervasive dolomitization above the base of the ROZ, and a sequence within the ROZ from an unaltered interval to anhydrite replacing leached skeletal grains. These changes are believed to be associated with anaerobic processes associated with “Mother Nature’s Waterflood” of the ROZ and are either not present or muted in the MPZ.

Oil and water samples from the pilot CO2 flood have been collected and were analyzed to help establish a baseline for the fluids in a ROZ CO2 flood. The team continuously monitored the progress of the CO2 flood in Goldsmith Field and interacted with operator personnel to identify diagnostics which would help in understanding the recovery process from the commingled ROZ and MPZ flood. The project first noted the significant increase in the production from the ROZ pilot and observed increasing production from the expansion to commingled ROZ and MPZ phases of the project. The reservoir engineering data from Legado Resources were periodically transferred to the research team allowing for the engineering reservoir characterization, flood performance analysis, and recommendations to be made for next generation technologies to apply.

The research team organized a ROZ roundtable in October 2011 with representatives from 10 companies interested in or participating in ROZ CO2 floods in the Permian Basin. The team presented a summary of the ROZ research being conducted under this project.  A preliminary review of the core evaluation was presented at the West Texas Geological Society Fall Symposium in Midland, TX in September 2011.

Detailed core descriptions of the nine available cores taken by Legado were created.

It was necessary for the research team to accomplish a history match of past oil, water, and gas production for the project in the central portion (the ROZ CO2 Pilot Flood Area) of the Goldsmith Field.  The collected information (geologic, reservoir, and production performance) was input into the reservoir model to ensure the simulations are reflective of the best available reservoir characterization data and for the past history of production.

The team completed the initial reservoir simulation of the ROZ CO2 flood using GEM.  The results of this simulation were used to compare the actual results being attained in Legado’s 4-pattern ROZ CO2 flood at Goldsmith with the model input data and results (such as CO2 injectivity, early time water, and oil and CO2 production).

A number of possible next generation production technologies were reviewed and evaluated for possible field application. A novel CO2 gas lift was recommended for implementation in producing wells and was very successful in increasing production rates while allowing a medium (capillary tubes) for conveyance of chemical inhibition treatments to increase run times and decrease operating costs.

The project was completed on June 30, 2015. The final report was accepted.